Historically, the stock market crashes an average of once almost every two years (with a crash defined as a decline of 10% from highs). Stocks overall haven’t suffered such a setback since the pandemic started a year and a half ago, so many investors worry that a 10% pullback is imminent.

The historical average is just that, though: an average. There’s no telling when the market will crash and what will ultimately cause it to temporarily fall in value. But a focus on quality companies riding economic growth trends will set you up for long-term success no matter what the stock market does. Three Fool.com contributors think Marvell Technology Group (NASDAQ:MRVL), Duolingo (NASDAQ:DUOL), and Apple (NASDAQ:AAPL) are great buys right now, and would be especially great pickups if the market falls in the next month.

Doubling down on data center hardware

Nicholas Rossolillo (Marvell Technology Group): Semiconductor designer Marvell is flying high this year — and not just because of the global chip shortage. The company has made four major acquisitions since 2018, and a fifth one is currently pending. These takeovers have transformed Marvell’s operations, reducing its reliance on consumer electronics and upping its game in data centers and 5G mobile networks.

In fact, Marvell said on its last earnings call that data center sales (40% of revenue) are poised to grow for years to come. Marvell’s product portfolio that spans data processing units (DPUs, the processors that manage the flow of data within a computing system) to optical and networking systems has helped Marvell increase its share of its customers’ complex computing needs. And as cloud computing grows in importance in the decade ahead, Marvell is well positioned to grow.

There are risks, however, as Marvell integrates its various new chip design subsidiaries. But the semiconductor company is already realizing positive results. Net losses were $276 million in the last quarter on revenue of $1.08 billion, but on an adjusted basis the company generated a robust $284 million profit. The non-adjusted and adjusted bottom-line results will converge over time as the amortized costs of the acquisitions are digested.

At the end of the day, though, this is a top chip stock for the cloud computing age. The stock is up 140% since the start of 2020, and while I still like it for the long haul, I’d be really happy to load up on a lot more if it pulled back in price from all-time highs. Data centers are at the heart of modern business operations these days, and Marvell is helping make it happen.

Anders Bylund (Duolingo): Language tutoring specialist Duolingo is off to the races. The stock has gained a market-stomping 46% since joining the public stock market at the end of July. Trading at a lofty 37 times trailing sales with negative earnings and cash flows, Duolingo is a value investor’s worst nightmare right now.

This little company is going places. I’m already a happy Duolingo shareholder and I’d be first in line to boost my holdings if another marketwide flight from high-priced growth stocks drags the stock back down. In fact, I might soon add a few shares to my holdings even if Duolingo stays aloft.

The language training platform you see today is only the beginning of a much larger ambition. Duolingo founders Luis von Ahn and Severin Hacker started the service with the vision that “free education will really change the world.” That aspiration came first and the business opportunity followed much later, when von Ahn saw that voluntary donations and his MacArthur Genius Grant wouldn’t be enough to let Duolingo change the world on a meaningful scale.

Foreign languages provide a solid training ground for Duolingo’s online tutoring services in a more general sense, eventually paving the way for launches of similar services for subjects such as math, physics, history, and underwater basket weaving. Developing this grand vision will take years — and it should be well worth the effort.

The global market for online learning services added up to a $226 billion revenue opportunity in 2020. Duolingo collected top-line sales of just $208 million over the last four quarters, which works out to a 0.1% slice of the addressable market. The long-term growth opportunity is massive.

Furthermore, Duolingo is well equipped to make the most of this opening. It posted 47% year-over-year revenue growth in the company’s first quarterly earnings report, and the balance sheet is squeaky clean with $115 million of cash reserves and just $8 million in long-term debts. It would take more than a temporary market storm to bring this company down.

So take advantage of lower prices if and when Duolingo’s stock is dragged down by the next market panic. The company is poised to spread its wings and fly. If the lofty valuation is the only thing holding you back, you should be prepared to take action on the inevitable dips along the way.

A downturn in China could bring an opportunity in Apple

Billy Duberstein (Apple): iPhone giant Apple could get hit hard by a global market sell-off, especially if the Evergrande crisis causes a recession in China. Last quarter, China accounted for more than 18% of Apple’s revenue, and a broader China recession could also cause a global slowdown outside the U.S., especially with China’s other trading partners in Europe and the rest of the Asia-Pacific region.

Of course, the last time Apple’s stock was hit by Chinese worries was in late 2018 and early 2019. That proved to be a tremendous buying opportunity. In fact, Apple’s stock has more than tripled off of that January 2019 bottom. 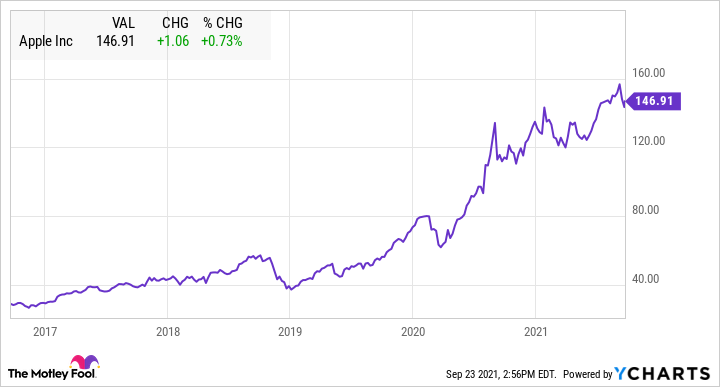 That’s because while iPhone sales can be inconsistent and lumpy, over the long run, Apple’s revenue should grow. Eventually, customers need to update their phones, even if they hold off during difficult economic times, and Apple users are generally incredibly loyal. The Apple device installed base continues to grow every quarter, and management has successfully grown its services business, which has much more recurring revenue, to about 21.4% of total revenue as of last quarter.

It’s true that Apple trades at a much higher earnings multiple than it did prior to 2020, and so its stock still has the possibility to fall significantly if the market gets scared. Yet its 28.5 P/E ratio today is still reasonable when considering its near-$200 billion cash pile, which should insulate this safe stock from any significant long-term danger.

And while Apple is primarily known for the iPhone and its various computing devices, it will also spend over $20 billion in research and development this year as it continues to innovate. Apple is likely to extend its brand power into future products and services going forward, such as healthcare, AR/VR, autonomous systems and vehicles, and others. Even recent new endeavors, such as Apple’s controversial foray into streaming, could surprise to the upside. After all, the Apple TV+ show Ted Lasso cleaned up at this year’s Emmy awards. That’s the fastest any new streaming service has won the Emmy for best show. Therefore, investors shouldn’t discount Apple becoming a more formidable force in streaming TV, either.

Basically, Apple is a cash-gushing, safe stock that still has a history of correcting in large market sell-offs. Given its consumer staple-like resilience and potential for future innovation, it’s a prime target for investors should the market swoon.

Why Is the Stock Market Down Today? Dow Slides and Target Tumbles.