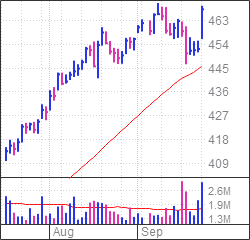 
Costco on Thursday reported fiscal fourth-quarter earnings after the close that beat expectations. The results came amid signs that it has held onto customers it drew last year during the height of coronavirus lockdown fears. But more recently, rising transportation and food costs have threatened margins.

COST stock is also in a three-weeks-tight pattern with a 469.87 buy point, according to MarketSmith analysis.

After it hit record highs earlier this month, Costco stock eased. But then it found support at its 10-week line on Monday. That was the first 10-week test for COST stock since a late-June breakout.

Meanwhile, shares have a strong 90 Composite Rating. Costco stock has an EPS Rating of 87. The stock was added to SwingTrader on Friday.

Same-store sales grew 15.5%, above FactSet estimates for a 12.4% gain. Those figures included the impacts from gas-price and foreign-exchange fluctuations.

Analysts remained generally upbeat about Costco following its earnings, even if some saw limited room to run for the stock price.

Costco stock analysts at BofA Global Research, in a research note on Friday, said “sales and member growth should help mitigate inflation pressures” in the company’s fiscal 2022. And they noted that the company plans to open 25 warehouses over that time.

“We continue to see favorable catalysts in the coming quarters, including a potential membership hike and special dividend,” Oppenheimer said. “Nearer-term, we expect more rangebound trade following the strong gains and uncertainty on the margin front.”

Visits to Costco through June, July and August rose when compared to 2019, according to Placer.ai, a foot-traffic analytics firm. They rose for rival wholesale clubs BJ’s and Sam’s Club as well.

“The incredible surge in visits is a strong sign that (Costco) not only succeeded in having relative strength during the pandemic, but turned that short term strength into a foundation for long term success,” Ethan Chernofsky, the firm’s VP of marketing, wrote in a blog post this month.

Early last year, customers stormed Costco and other big grocery outlets to load up on food and other items, fearing a long period of coronavirus-related quarantine. Costco ended fiscal 2020 with a net sales increase of 9%. Same-store sales rose 8% over that time.

For its third quarter, Costco reported a same-store sales jump of 15%, excluding the effects of gas prices and foreign exchange. That figure rose 12.9% in the second quarter.

As with many other businesses, Costco is also operating in an environment where employers are starting to pay more to attract workers, as many prospective workers stay on the sidelines, helped by unemployment and stimulus cash, to weigh their career options.

Elsewhere, a supply chain left disjointed by the pandemic has pushed transportation and grocery costs higher. Ocean freight remains backed up on the major shipping lanes between the U.S. and Asia. Warehouses are packed. Truckers are harder to find.

Costco’s rivals have also noted those challenges. Robert Eddy, CEO of BJ’s Wholesale, said at a conference this month that the company was seeing supply disruptions in “many, many categories.”

“Think about categories like seasonal goods like patio sets that are made in China and shipped over here on a boat,” he said. “Think about the electronics businesses that might be assembled in the U.S. or at least in North America but many of the components come over from Asia. You’re seeing TVs and computers and things beyond allocation.”

“That stuff persists for a while I think,” Eddy said.

Stocks To Watch: Which Companies Are Now Outperforming 95% Of All Stocks?

Check Out The Big Picture By Investor’s Business Daily