An Israeli startup has unveiled the design for its debut “flying” vehicle, an electric vertical takeoff and landing (eVTOL) aircraft for individual consumers, and said it was accepting pre-orders.

The Pardes Hanna-based startup, called AIR (formerly Porality Mobility), was first conceived in 2017 by Chen Rosen, an aviation expert, who was later joined by serial entrepreneurs Rani Plaut and Netanel Goldberg. Plaut is also the executive chairman of Israeli automotive startup Moodify, and an executive board member at Tactile Mobility, a Haifa-based startup that provides smart cars with the ability to “feel the road.”

AIR developed the aircraft AIR ONE, an all-electric two-seater eVTOL that offers a range of 110 miles (177 km) on a single charge at speeds of up to 155 miles (250 km) per hour, with a flight time of one hour. The aircraft has collapsible wings for easy parking and the ability to take off from or land on any flat surface.

The startup said in a statement that it “combines sustainable aerospace innovation with automotive know-how” and is tapping into a nascent eVTOL market estimated to reach $12 billion by 2030.

“AIR is looking to make a true difference by making the freedom of flight truly accessible to people,” Plaut, who serves as AIR’s CEO, told The Times of Israel in a phone interview on Thursday.

“At the moment, flying for most of us involves getting into a huge metal tube and being transported in that way. You don’t really feel as if you are flying. We want to bring aviation to the masses and combine the range, simplicity and ease-of-use of fly-by-wire [computerized flight systems] with the DNA of cars — usability, low cost of maintenance and so on. And it’s electric so there’s a green element,” said Plaut.

“Aircraft can be easy to handle if you have good tech,” he said. To that end, AIR developed what it called “fly by intent” software, which will allow ordinary people to operate and navigate the vehicle, not just trained pilots. The aircraft is also equipped with an AI-enabled monitoring system for frequent inspections to “ensure paramount safety, even for riders with minimal training,” the company said.

AIR said the aircraft “puts the freedom to fly directly in the hands of consumers” for “adventure, fun, and day-to-day flying.”

“The future of mobility is in the sky, but to get there we need to build consumer confidence in eVTOLs as a legitimate mode of everyday transport and develop vehicles on a mass-scale to bring that vision to life,” Plaut said in the earlier announcement.

“The process of certification takes approximately 4-5 years and we are about halfway there,” Plaut said. Pending all regulatory approval, the plan is to finish the certification process by the end of 2023 and start delivering the aircraft in 2024, he said.

AIR’s founders believe that while the overall sector is focused on “commercially piloted or autonomous air taxis for cities,” the AIR ONE offers “an alternative for those who want to enjoy the ultimate freedom of flying on their own terms.”

“We want to sell directly to consumers. Most of our competitors are doing things like air taxis and shuttles,” Plaut added.

He doesn’t foresee AIR becoming a major auto/aircraft maker, but Plaut said the initial vision is to sell approximately 10,000 AIR ONEs per year.

“At the moment, there are approximately 1.5 billion cars in the world, with about 80 million cars produced every year. If we can get 10,000 cars into the air, we can start making a dent. Nobody is doing this,” he said.

Current pre-orders for the AIR ONE are in the “triple digits,” said Plaut, and he imagines that number will grow significantly as the certification process advances.

The company is not revealing the price of the aircraft “because we are not yet sure but it should be well below the price of a luxury car, for example, lower than $200,000,” Plaut said.

In the US, a number of similar eVTOL companies have GI certification already, including Archer Aviation, a Palo Alto-based firm developing an aircraft to shuttle people through cities in a “quick, safe, sustainable, and cost-effective manner,” and Santa Cruz-based Joby Aviation, a transportation company developing an all-electric, five-seater passenger aircraft. 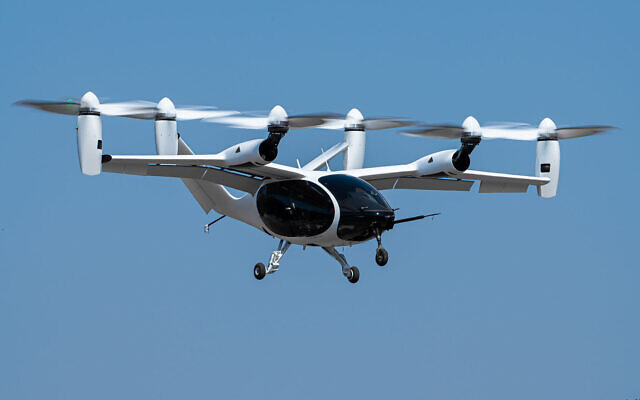 A Joby Aircraft in flight in northern California. (Joby Aviation)

The tech was developed by Tactical Robotics, the parent company of Urban Aeronautics, and is also used in the larger, VTOL (vertical takeoff and landing aircraft) autonomous version of the airborne vehicle, called Cormorant (formerly AirMule). Cormorant was developed as a solution for emergency responses to natural disasters or in combat environments to deliver food, water, and supplies, and for medical evacuations.

Meanwhile, CityHawk is a car-sized eVTOL designed for multiple trips in urban areas as commercial air charters and emergency medical services (EMS). The aircraft will be fueled by hydrogen, and, the company said, “will be the most environmentally friendly and efficient air fleet on the planet.” 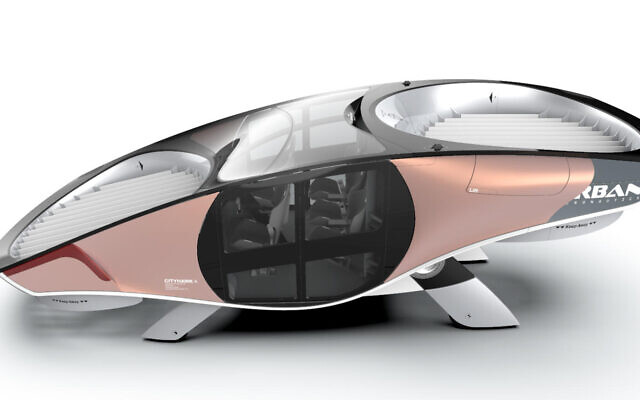 Last year, Urban Aeronautics signed an agreement with Hatzolah Air, the aviation arm of EMS organization Hatzolah, with divisions in the US and Israel, to deliver four CityHawks for ambulance use.

The Yavneh-based company also has an agreement with American aerospace multinational Boeing to explore the development of Tactile Robotics’ Fancraft technology with potential uses for piloted and autonomous light aircraft.

Urban Aeronautics said it has over 300 successful test flights of its prototypes, which have been in development since 2006.

Canoo, Another EV Start-Up, Says It Has Cash Problems

Local start-up blown away by support for cheesy snack