What’s the best course of action during a market downturn? Recent history can help us answer that question. The S&P 500 has soared by 83.3% since it bottomed out in late March 2020, driven by the emergence of COVID-19. Going further back reveals the same trend. For instance, those who held on and added to their positions in great companies during the market crash of the late 2000s made a lot of money in the past decade.

That’s why investors shouldn’t worry too much about the current volatile state of the market. Even if the market keeps dropping, that merely presents opportunities for investors to purchase shares of excellent stocks for a discount. With that as a backdrop, let’s look at two stocks that have gotten hammered lately but could still provide above-average returns in the next decade: Fiverr International ( FVRR -5.51% ) and Netflix ( NFLX -1.72% ).

Fiverr is a platform where freelancers can offer their services to individuals and businesses. It makes money through transaction fees. The gig economy experienced increased adoption in 2020, but some of that momentum has subsided. That helps explain why Fiverr’s shares have been hammered in the past year. But there’s still hope.

Fiverr guided for revenue between $373 million and $379 million for the fiscal year 2022, which would represent year-over-year revenue growth between 25% and 27%. While that’s well below the growth rates it delivered last year — Fiverr’s 2021 top line soared by 57% year over year to $297.7 million — investors should look at the bigger picture. 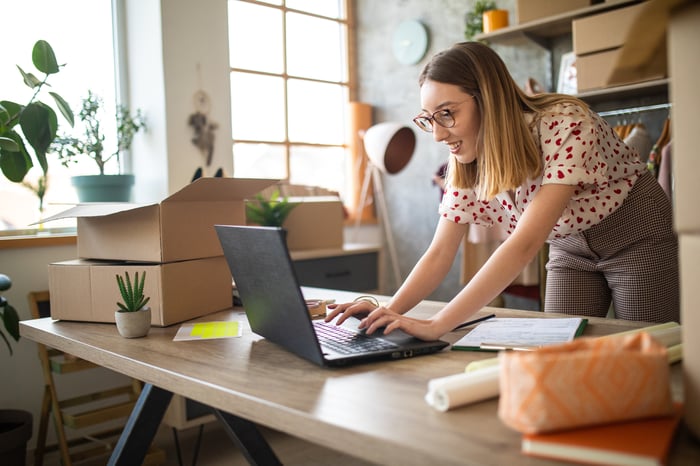 The pandemic tailwind arguably spilled into 2021, and Fiverr expected to face challenging year-over-year comparisons. What’s more important are the company’s long-term prospects. The gig economy isn’t simply a pandemic trend, and it’s here to stay. Enlisting people to do freelance and contract work is convenient for businesses and cheaper and less time-consuming than hiring employees.

And, of course, freelancers benefit as well. Fiverr thinks it has a $115 billion total addressable market, which provides a substantial runway for growth. While it has competitors and likely won’t be the only one to benefit from this opportunity, it’s well-positioned to be one of the long-term winners. Lastly, Fiverr is building a competitive edge: The network effect that occurs when the value of a service increases as more people use it.

Both freelancers and the people looking for their services will find the platform more attractive as it grows its user base. Fiverr isn’t profitable yet, but its increasing revenue, its growing moat, and the growth opportunities its industry boasts will allow it to show green on the bottom line eventually. That’s why Fiverr stock looks like a buy, especially after dropping by more than 75% in the past year.

Streaming giant Netflix currently faces multiple headwinds. After its paid subscriber count soared amid the pandemic, it has slowed down substantially in recent quarters, and that’s one of the big reasons investors have been selling off the stock. The streaming industry is also more competitive than ever, and plenty of newcomers have joined the party.

Some of Netflix’s peers have the means to operate their streaming businesses at a loss. That applies to Amazon‘s Prime Video. Since streaming is only a small part of a robust overall business for Amazon, it can afford to invest heavily in content to acquire new users, even if these efforts are not yet yielding profits. That’s a problem for Netflix.

But the investing thesis for buying Netflix remains strong. While competition is undoubtedly a problem, there’s more than enough space for multiple winners. Netflix estimates that it still controls less than 10% of television screening time in the U.S., despite its seeming ubiquity.

That metric points to a massive opportunity, since the streaming industry’s penetration is likely lower almost everywhere else in the world. Netflix’s new subscribers will increasingly come from abroad. The company reported 8.3 million net new additions during the fourth quarter, only 1.2 million of whom came from North America.

But even in North America, Netflix can continue making headway and gaining more viewing time. The company’s content strategy has been incredibly successful, as evidenced by the many awards its productions have won. It’s also worth noting that Netflix uses the data it acquires from its subscribers to recommend movies and shows (and inspire new creations), which keeps customers coming back for more.

There remains significant whitespace in the streaming industry. As one of the undisputed leaders in the field with a proven strategy, I expect Netflix to turn things around eventually and still provide excellent returns in the next 10 years. That’s why investors shouldn’t swear off this tech giant just yet.

This article represents the opinion of the writer, who may disagree with the “official” recommendation position of a Motley Fool premium advisory service. We’re motley! Questioning an investing thesis – even one of our own – helps us all think critically about investing and make decisions that help us become smarter, happier, and richer.

What Is a Bear Market? Here’s How It’s Affecting Your Portfolio

Rivian CEO Bought Stock in the EV Start-Up. The Shares Are Rising.

Financial Secrecy Index: The US is the world’s leading enabler of financial secrecy | USA

May 26, 2022 Chris Holland
We use cookies on our website to give you the most relevant experience by remembering your preferences and repeat visits. By clicking “Accept All”, you consent to the use of ALL the cookies. However, you may visit "Cookie Settings" to provide a controlled consent.
Cookie SettingsAccept All
Manage consent